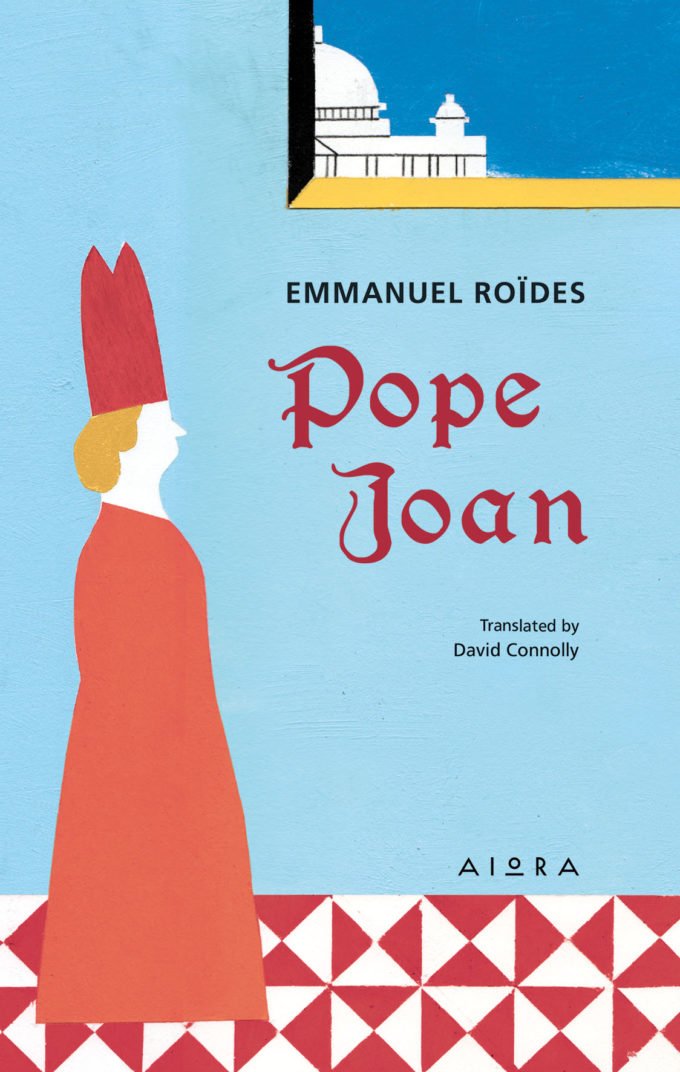 Roïdes’ irreverent, witty and delightful novel tells the story of Joan who, according to a popular medieval legend, ascended to the Papal Throne as Pope John VIII. The truth of the legend is of little importance as the book is far more than a historical novel and, in fact, parodies the popular historical romances of the time. In Joan, Roïdes has created one of the most remarkable characters in modern Greek literature and in so doing has assured his place as one of its classic authors.

Pope Joan has a double claim on our attention for it occupies a central position among the popular books of modern Greece; and it is also in its own way a small masterpiece which might occupy a position on the bookshelf of the discerning reader midway, say, between Candide and Thaïs…
Lawrence Durrell

…the only Greek novel of the nineteenth century to have found a place, albeit a modest one, in the European canon.
Roderick Beaton

From the translator's note

Pope Joan, or Papissa Ioanna as is the title of the book in Greek, was presented by Roïdes as a “medieval study”. It is based on the story that first appeared in 13th-century chronicles and later spread throughout Europe of a female pope, who reigned, according to some sources, from 855 to 857 AD. Different versions of the story describe her as a talented and learned woman who disguised herself as a man in order to enter the Church and follow her lover. Because of her exceptional abilities, she soon rose through the church hierarchy and was eventually elected pope. Her sex was discovered when she gave birth during a religious procession and she is said to have died shortly after. The story was widely believed for centuries, but today it is generally regarded as fictional. In his preface “To the Reader”, Roïdes describes how he heard the story from the mouth of a newspaper editor while in a cellar in Genoa, sheltering from the siege guns of Victor Emmanuel, and how, fascinated by the story, he later researched the historical facts surrounding it in the library of Berlin.

Published in 1866 (with successive editions in 1879 and 1882), Roïdes’ Pope Joan immediately caused a sensation because of its caustic criticism of the Catholic clergy of the time and of the Church ’ s traditions and customs, for the book is not just a portrait of Joan, but paints a tapestry of her entire age. Surprisingly, it was the Greek Orthodox Church that took offence, perceiving its own clergy as being the real target of this criticism and its own traditions and customs as being the object of ridicule and satire in the loosely-veiled comparison Roïdes makes between the medieval times he describes and his own times. Consequently, the Holy Synod denounced the book and anathematized it. Roïdes himself seems to have been quite indifferent to this, although, in later editions of the work, he takes pains to point out to his critics that all the facts and events related in the book are based on indisputable testimonies and that his descriptions of life in the monasteries, of church rituals and theological doctrines are all taken from medieval sources and are the result of extensive historical research.

As might be expected, the controversy surrounding the book only enhanced Roïdes’ fame, while the book itself was soon translated into other European languages. It enjoyed a huge success, for example, in France, where the translation of 1878 went through seven reprints in only three years and was notably re-translated by Alfred Jarry and Jean Saltas in 1908. In England, two trans­lations of the work appeared during Roïdes’ lifetime: the one by Charles Hastings Collette (1886) and the other by J.H. Freese (1900). It was presumably in one of these translations that the work was known and admired by Mark Twain. The work was re-translated in the 20th century by T.D. Kriton (1935) and achieved further notoriety in the English-speaking world in the rather free and racy translation by Lawrence Durrell (1954).

In Greece, the book remained for a long time the subject of scathing criticism or, at best, a cause for perplexity among critics, who were at pains to classify it in terms of genre (historical study, romance, parody, satire?). Apart from the criticism relating to its irreverence, anticlericalism and bawdiness, it was criticized for its borrowings, its often outlandish similes and a style that was far removed from the romantic norms of the day, at which Roïdes constantly pokes fun. In more recent times, however, it has come to be admired for its elegant and rhetorical style, for its inventive and striking similes and for its irony and wittiness. Roïdes’ distorted and often incorrect references to Biblical passages, for which he was criticized in the past, are now more properly seen as a deliberate part of his overall satirical and subversive intentions and, in this, the work is notably modernist in its outlook and anti-conformism. Even his playful asides to the reader are very modern in their subversive and tongue-in-cheek effect. Today, the book is generally regarded as a comic masterpiece of modern Greek literature and remains ever relevant for its satire on both secular and religious authority.